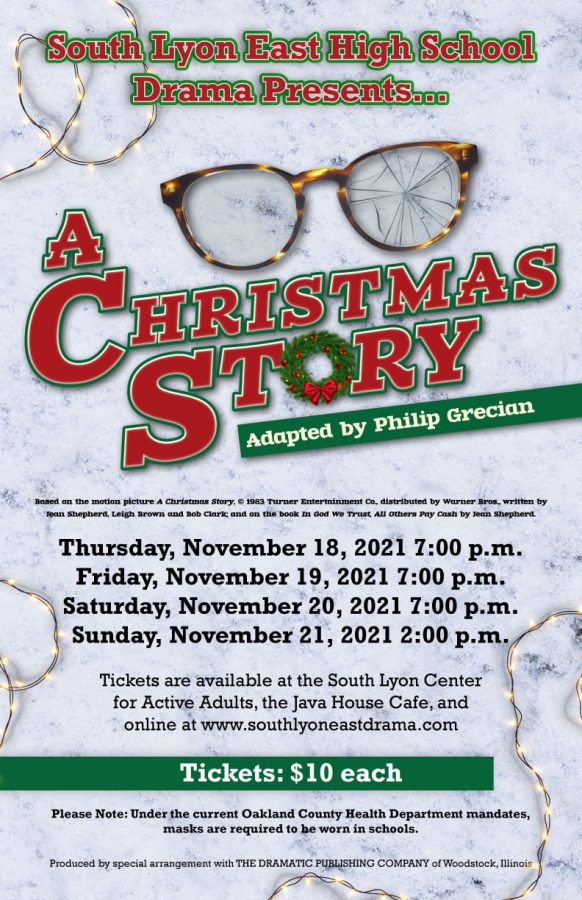 East thespians are feeling extra lucky to finally be able to return to the stage and host a fall play. This year, drama students will be performing “A Christmas Story” starting Nov. 18.  Auditions were held in September, and roles have been given out to all of the cast.
The cast list is as follows:
Ralphie: Nick Pilotto
Ralph: Ryan O’Connor
Mother: Maddie Wickenshieser
Old Man: Grant Kruger
Randy: Matthew Tullio
Miss Shields: Noelle Jenosky
Esther Jane: Phoebe Balog
Helen: Morgan Lecrone
Schwartz: Jordyn Giganti
Flick: Faith Troost
Farkas: Riley Bollock
Voice-overs: Lucas Stec
The Christmas Story play is the musical version of the 1983 popular Christmas film “A Christmas Story” where the story is focused around the life of Ralphie, a nine-year-old boy. Ralphie is bullied at school and by his brother, Randy, so as a result for Christmas all he wants is a BB gun but is told that if he gets one he will shoot his eye out. In the end, Ralphie gets one for Christmas but ends up breaking his glasses because a bullet ricochets off of it. However, he doesn’t want anyone to know this so he makes up a story about an icicle breaking them.

The East cast list includes the majority of the characters that are seen in the movie but has been adapted a bit to fit into the play version.

Nick Pilotto, who is playing the main character, Ralphie, says, “There is a lot of cool stuff that is happening this year. This is the first show that I have gotten a big part in. In the past, when we did the dining room play I was only in like two scenes and I barely talked. But now, this one is very technical and there is a lot going on throughout the whole play so it is very exciting for all of that to be happening.”

Pilotto was surprised to get the lead role, “I was in absolute shock. I mean I wanted this part but I never imagined I would get it. It was like a dream come true and I am thrilled that I was chosen,” he said.

“I am very excited that we got a lot of new faces this year. It’s really fun to get to see the underclassmen get to step up and grow in their skills, especially since I am a senior and it will be my last fall play. I like knowing that there are other people that will get to carry on the plays. In fact, many of the freshmen are actually the leads this year, so it’s really cool to get to see that and get to work with them,” Senior Grant Kruger, says.

Freshman Maddie Wickenshieser who plays “The Mother” says, “The show is going to be a lot bigger than any other one that I have been in before due to the amount of time and effort that is going into the sets and the props. Everything that is being made is made to be as accurate as possible to be as realistic and enjoyable as it can be to give the audience the best show. So I am excited to see all of it come to life for the audience and for the cast members who put in so much time.”

“It is the first real play where I have had a big role in, so I’m very excited for it. However, not only is it my first play but it is my first year in high school so I get a whole new experience with new people. I also can’t wait to be able to grow in my skills and get to work with all of the other cast members to get this play ready to be able to show off to everyone,” Ryan O’Connor explained about his first play.

Dress rehearsals are underway for the play as the cast members are getting ready to be able to show off everything they have been working on. Crew members are also hard at work making the sets and props for the show.

Show performances are November 18-21. Tickets can be purchased on their website, and students are discounted to half price at $5 each.